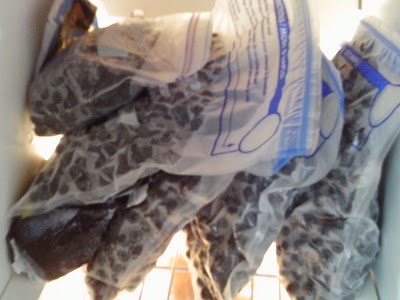 Blueberries are Lee's favorite fruit. We have tried to grow them, unsuccessfully. I think the location and soil has a lot to do with it, but nonetheless, no bluebs. So when the Roanoke Times had an article about pick-your-own blueberries, well, we were in!

The first farm we went to was Woodall Blueberries in New Castle. It is a LOOOONG drive from Buchanan, about 1 hour. We left early expecting heat. It was so cold, in the sixties, and overcast that I got Reynauds in my fingers. We left after picking a little more than 1 gallon. They charge $10.00 per gallon and gave us the extra at no charge. They were pretty picked over, but we got all we wanted in about 1 and 1/2 hours.

Next we drove to 3 Birds Berry Farm in Blacksburg. They had a lot more berries in cultivation, including raspberries and blackberries. Unfortunately we didn't read the part about closing, only the part about when they open, so we didn't have time to do much in the way of picking. Plus it was a Saturday and they explained that earlier in the week is better. By Friday they get pretty picked out and after a day to ripen with no pickers on Sunday, Monday and Tuesday were best.

We managed to get 1 1/2 gallons of blueberries quite quickly and then we left as they were closing. So, no other berries, but we will know better next year. They charge $20.00 a gallon, which is why we went to Woodalls first. But the had a much larger operation and three different berries, so we will hit them earlier and mid-week next year.

I have no idea what caused it to be cold and overcast and rainish, but it made for rather nice picking weather. Early in the day my fingers got very cold, but by the time we got to 3 Birds it was perfect. I am glad I brought tennies instead of my usual weekend footwear preference of flip-flops!. I can imagine that it would have been less pleasant on a hot buggy day. I guess we will find out next year.

I followed the advice at the farms and picked over the berries and then froze them in Ziploc bags with the air sucked out. I will wash them when I use them and try to get any frozen spideys and things off before I cook them. I'm having company in a few weeks. I plan on blueberry pies and crepes and pancakes and muffins, and maybe a cobbler or two. YUM. I have a freezer full and I'm not afraid to use them!
Posted by Rebecca at 3:59 PM 1 comment:

When we built the barn and the pastures for the horses I was not working at the library. When I was called and informed that I had gotten the job at the library, Lee and I were in the middle of building two turnouts for the two stalls we were going to use for our horses. If we got any boarders we would then build the additional turnouts. Part of this reasoning was because of the amount of work and a lot was because the wood was really expensive.

It looks like we won't be getting any boarders any time soon and I want to move Libby and Claire to other stalls so we can wash the ones they are in. I also hope by rotating stall and turnouts, they will hold grass that much longer. In reality I know they won't, but I think that Claire might keep a bit of grass. Libby will pace hers away in a matter of days.

So Lee went and picked up the posts and we started digging holes. We have an auger that works off the three point hitch on the tractor. We can lift it and lower it and spin it, but there is no downward pressure. This makes it hard to use on compact soil and dirt, but hope springs eternal, so we marked the corners and started digging.

This sounds way faster than it is. You have to run a string to keep things straight. We also had to work off the existing turnout and try to keep every thing square. We decided to build one big turnout for the last two stalls on each side. This would give the horses more room and also be fewer posts and post holes! This was a big part of the decision! We placed a post next to the barn where the division would be so that we could run a hot wire or some other temporary divider should we need to at some future time. It would also mean fewer post to "plant" should we get boarders.

When the barn was built, the contractor had to scrape the field flat. This meant a lot of the nice soft topsoil was removed and spread around and the rest is very compact. It is sort of clay like and very red. We wondered if this was the result of Civil War battles done on this site, but we know that is not so. Makes for a chilling story, though. 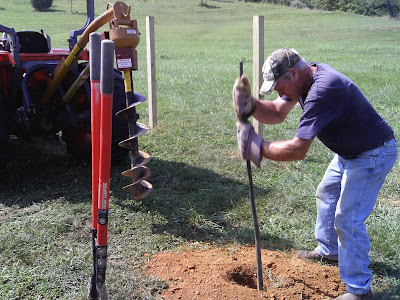 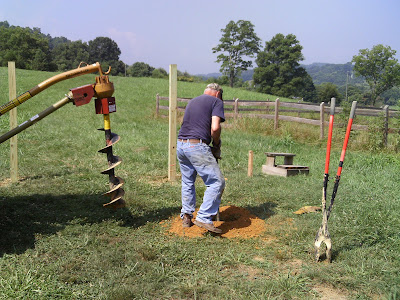 Right away we had problems with the post-hole digger. We came up with a process where Lee would run it for a minute or so. Then he would lift it out and drive forward a few feet. I would use the heavy bar to loosen the soil or break up rocks and he would back the tractor back up again. This required Lee to be twisted half way around and look over his shoulder for hours. Every once in a while he would stop the tractor and come back to chop away at the hole with the clamshell, manual post hole digger. Then back to the tractor and more twisting. He is very sore at this point.

We were making progress, but it was very slow. It took about 45 minutes to an hour for each hole and that was a lot of heavy work in high humidity and heat for us. RJ was exhausted just watching us! 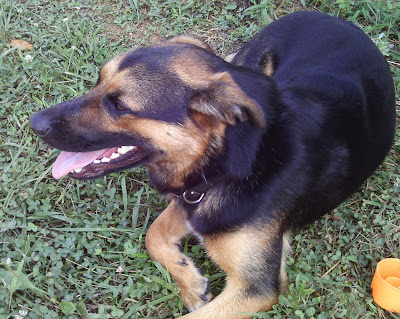 We took a break about 1:00 to go get the gates I wanted to install. I liked the idea for many reasons. One was, if there was a fire, we had an alternate exit from the barn. Also, there are times when I just want to put a horse in or get them out and I am in the pasture. Fewer steps ...always a plus!

We were tired and wanted to go the the Fincastle Winery for the program they were putting on. That is a story for another time, but the Botetourt wineries have been having music and food and wine tastings on the weekends and we are rotating around and trying them all. So we quit early on Saturday.

Early Sunday we started in again. The second hole we started to dig was going to be the side where the hinges for the gate would be. Then we hit rock. We started breaking it with the breaking bar, but soon realized that it was too big and too deep for us to make any sort of headway. The inside half of the hole was soil, though. After much back breaking work, we decided the only thing to do was to dig the hole back a few inches and then place a second post and bolt it to the first. We used a LOT of concrete and decided to put the latch on this side and the hinge on the other side, as it will have a lighter load that way. It is currently sitting on top of the rock with support from the other post and I don't think it will go anywhere. It does look stupid, though. 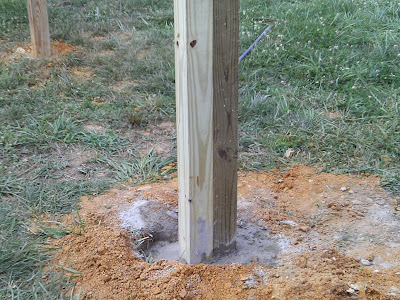 We hit rock in the next hole. This was starting to get frustrating! We were hot and sweaty and drinking water like crazy. I could feel my skin burning even though I had slathered on sunscreen. Sweat kept dripping off my nose and my sleeves were wet from wiping off my face. Worse than that I was developing a major case of hat hair! OK, I wasn't too concerned about the hair. There was no way I would be seen until a bath and a blow dry had taken place, so barring a trip to the emergency room, it wasn't an issue. I was jealous of Lee's new hair cut (buzz), though. Periodically he would go over to the hose, remove his hat and run the water all over his face and head. Within minutes he was back to sweating, but it was cool for awhile.

By 1:00 I was again the proud owner of noodles for arms and legs. Lee was sore, but I was just weak. Farmers used to say that they worked from "can see to can't see". This meant they worked from dawn to dusk. Lee and I work from can do to can't do. When we run out of steam we are done. Sometimes we go back in the evenings when it is cooler and we have rested. I don't know if I can today. I told Lee we can do a hole or two each evening after work. Maybe we won't have the same problem with rocks that we had on the first side. It was a lot easier when we built the pastures and the perimeter fencing. These were places that had not been scraped and compacted by heavy equipment. I don't hold out much hope for improved conditions. I'll keep you posted. Get it????
Posted by Rebecca at 1:04 PM 1 comment: 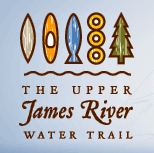